So, let's keep it rolling, shall we?
The page above is from an issue of Champions and, among other characters, features Amak Aliyah who is an Inuk super hero called Snowguard. The reason I'm writing about it now is there was a little social media blip about her recently, courtesy of this tweet: 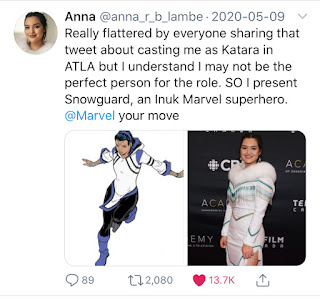 Anna Lambe is a promising young actress who starred in the made-in-Nunavut movie The Grizzlies and a lot of people think would be a good fit for the new Avatar, the Last Airbender series that is gearing up on Netflix. I don't know much about that franchise, so I can't say one way or another if she would be. But she would make a great Snowguard. I'm not the only one who thinks so, based on the number of reactions that tweet got. Including from Snowguard's creators Jim Zub, Nyla Innuksuk, and Sean Iszaake.
However, up until recently I would have said the odds of Snowguard making the leap from pages to the screen was small. She is still a new character with maybe 2 dozen appearances. But Simu Liu was politely teasing Marvel about casting him as Shang Chi, which they then did. Plus, Disney/Marvel clearly have plans for their younger heroes on the Disney+ streaming service. There's a Ms. Marvel show debuting next year and rumours exploded a couple of weeks ago that there's an Ironheart show in the work on the service. That's a chunk of the Champions team right there. So who knows? Maybe she gets a call from Marvel. I certainly hope so.
As for this page, ever since Snowguard debuted I'd been looking to get a page of art with her on it. Just one problem. A lot of the artists on the book during that first year were working digitally. I would have bought a page from her first story arc, but Sean is a digital artist. There was an annual featuring Snowguard returning to Pangnirtung by Toronto artist Marcus To. Except he also switched from pencil to digital a few years ago.
However, last year (or possibly 10 years ago. Time is fluid) when I was at Emerald City Comic Con I got the chance to meet Jim Zub and get a bunch of books signed, including a over a dozen copies of the Champions annual signed and personalized for Cathy's Grade 5 class that year (I just found out via Twitter it's also Jim's birthday today, so this is good timing. And Happy Birthday). Sitting next to him was BC-based artist Max Dunbar. Jim and Max share a massive love of all things Dungeons & Dragons and the previous year there was a Champions story arc where the characters get thrown into an alternate dimension (it happens) where they also change personalities and become people who closely resemble the type of characters you might play in Dungeons & Dragons.
It's a fun story arc, but what caught my eye was Max Dunbar. It was the kind of art that makes you wonder who the hell is this guy and where did he come from. Great detail, lots of energy, not afraid of big, complex action sequences and putting ridiculous effort into splash pages. I knew he was going to be at the con, and that he would have pages for sale. It took me all of about 30 seconds to settle on this page. Amak with a big ass hammer, a cool looking Ms. Marvel...it was a no brainer.
I don't pretend to know Max well, but he appears very generous with his art. I remember he gifted Jim with a stunning two-page spread from that Champions run. He recently gave away a stunning piece of Marvel mash-up art....all you had to do was prove you donated to a charity or that you were a first responder for a chance to enter the contest.
He quoted me a price for that page that was more than fair, and then added "But if you think that's too much, I can come down a bit." Jim and his partner Stacy were at the table next to him. I swear one of them was going to go over and shake him before I said "I don't haggle with artists. That's a great price."
I actually own another piece of Max's art, but that's for another day. That Champions page currently is hanging near my cubicle at work.
Last Five
1. Meeting in the aisle - Radiohead
2. Blue skies over bad lands - Matthew Good
3. While we were hunting rabbits - Matthew Good*
4. Restless - Alison Krauss and Union Station
5. My time is coming - The Hives
Posted by towniebastard at 11:43 am