Pretty much every day I get a reason to be happy that Cathy convinced me five years ago that we should buy a house in Iqaluit. It'll be five years ago in December that we moved in, but it was around this time in 2009 that we started seriously looking.

Understand, I did not want to buy a house. I was happy in our apartment and I have a deep, deep, deep loathing of owing money to anybody, let alone a bank. Seriously, if I have the option of borrowing $2.50 for a coffee in the morning and paying the person back in the afternoon, or just going without a coffee, I will chose doing without every time.

So owing a bank a few hundred thousand dollars...at a time when I was unemployed, no...that was something I was not going to do.

If you've met my wife she's very...persuasive. Which is another way of saying I find it nearly impossible to say no to her.

But we did find a place and it's worked out well. We were unbelievably lucky, of course. It's a good house, but we didn't do an inspection on it because, well, there were no inspectors in Nunavut at that time. It was the second place we put an offer in on. We didn't use a real estate agent. We had enough money saved for the 20% downpayment, so no insurance was necessary. And we bought just before Iqaluit's real estate market went batshit crazy.

(Although it seems to have cooled. People are having a hard time making the leap of spending $500,000 on a three bedroom, one bathroom house with less than 2,000 square feet).

So yes, lucky. Insanely lucky. I try not to think of how much karma we burned on getting this place as hassle-free as we did. And we're always hearing stories about people living in apartments ready to snap. One friend is threatening to take a fire extinguisher to the next drunk in his building who pulls the fire alarm. I'm not sure if he's going to empty the canister on the person or hit them over the head with it.

Having said that, a house is still a house. It's not like the money is done once you buy the place. We got a good deal, but it's not like we haven't spent thousands since then. Tearing up carpet to put in hardwood flooring. New paint. New laminate flooring in the kitchen, bathroom and porch. New door in the hallway. New furniture and appliances. It all adds up.

But this summer we engaged in the scariest (for me) addition to the house....we hired a contractor.

Understand I am leery putting my fate into the hands of people who have vastly more knowledge and experience than I do, who are in a position of power than me, and who I am trust to do the right thing and giving them thousands of dollars. Because we have all heard horror stories about contractors. I'm not putting them at the same level as consultants (Hey kids! Guy Fawkes Day is coming up. Save your local forests and pitch some consultants on the fire instead!), but they make me nervous.

Basically, what was required was this. The house is 15 years old. For those 15 years the prevailing winds have slammed into the east facing side of the house. It take a toll. The siding was getting cracked and starting to bend. By the way, it's the same with every house on our street. We're hardly alone.

Last February we had a delightful windstorm with winds well over 120 km/h. When you're sitting in your living room, with no power, listening to the wind pound the size of your house that you know is vulnerable, and reading reports on Twitter of siding flying off newer houses on the Plateau, you make certain promises to yourself.

So come this summer, after much badgering, we finally got a contractor to give us an estimate on the work we felt was needed. The siding on the east side of the house had to be replaced. And rather than try to match the colour of the new siding to the rest of the house, we just decided to repaint the house. It could use it, to be honest. It was faded and a really ugly green colour we always loathed.

Oh, and while they were at it, check the roof to make sure it was ok and check the foundations to see if it had shifted (the joys of owning a house on stilts) and make any necessary adjustments.

The estimate was...considerable. But we had saved the money, bit the bullet and told them to go ahead.

You know, knock on wood, it seem to go pretty well. The did completely repainted the house, including the deck, skirting and eves, plus replaced all the siding on one side of the house in less than a week. No problems with the roof and while the foundation shifted slightly (all houses in Nunavut go through it) it seems to have settled into it's new spot. They attempted to shift the house back, but couldn't budge it. So she is where she is. They also adjusted the front and side decks to make them more stable. Doesn't appear they charged me for it either.

Oh, and it came in under estimate. They didn't charge me for the foundation work because, well, they couldn't move the foundation. Which I understand is logical, but still surprises me they did it. I suspect some contractors would not be quite that understanding.

So what do we have now? Well we have a house that used to look like this... 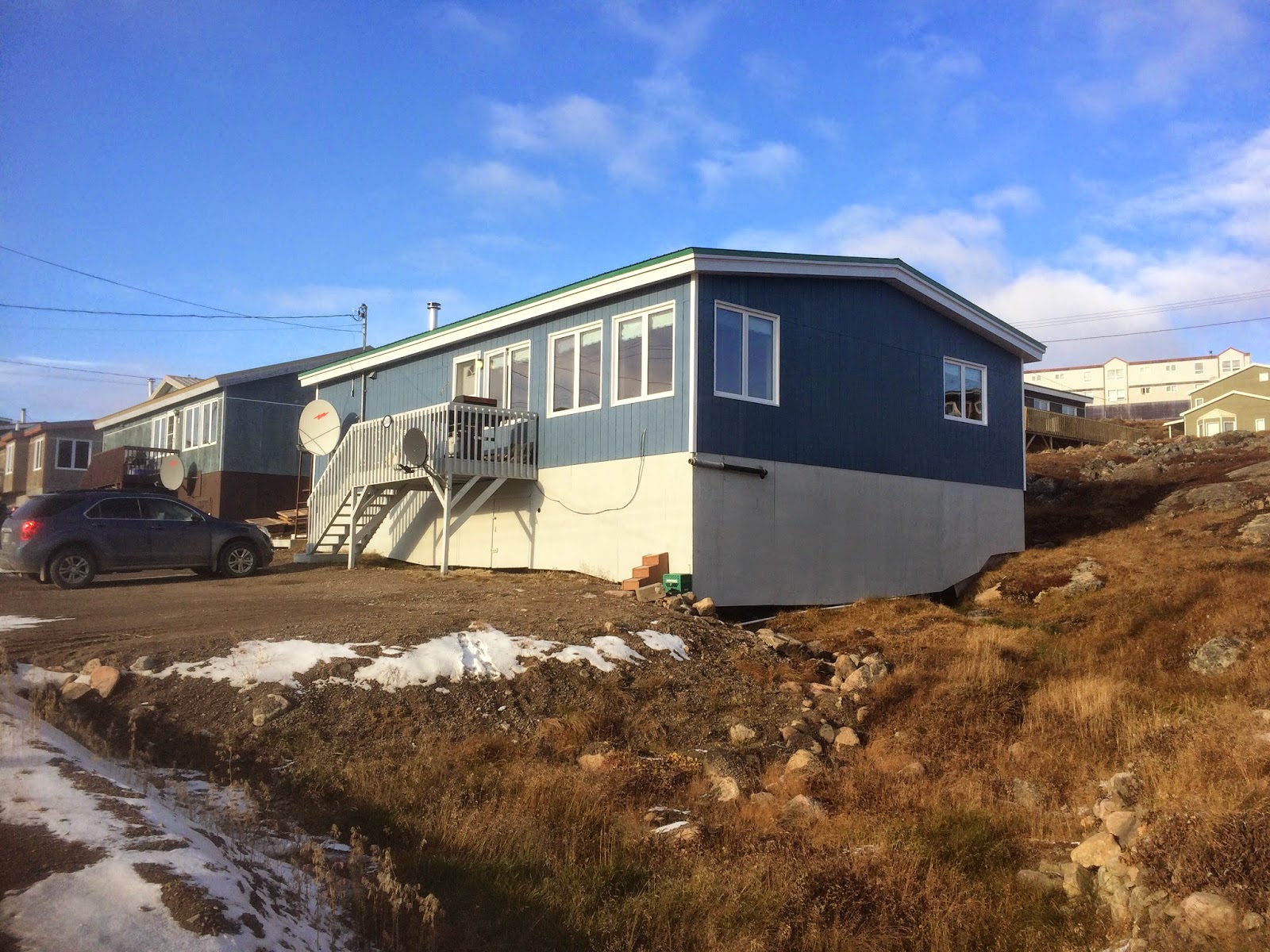 So yeah, a much nicer looking house. I would have preferred something a bit brighter, but we just couldn't find a bright colour we liked. Still, we're really happy with it. And I'm not saying we're done. You're never done with a house. You're just in-between projects. But there is nothing that needs immediate doing. And after nearly five years, that's a really nice feeling.