I’ve been going to the gym for almost two years now. It’ll be two in February, but it’s close enough for this blog post’s purposes. According to the computer they use to keep track of my usage, that’s meant more than 300 trips the gym during that period of time. I also just paid for another year’s membership, so that number is only going to keep going up
I’m not putting that out there to look for applause, but to point out that I spend a decent part of my week at that place. I try very hard when I get to the gym to focus on the workout. It’s meant in the past that I’ve been exceptionally, and inadvertently, rude. I put my headphones on and just go. So people have said hello to me and I haven’t acknowledge them. That’s because I didn’t notice they were there. When I’m in the zone, which is where I try to be, nothing gets through. That’s a good thing. I’m not there to socialize; I’m there to do one specific thing and then go home.
Having said that, and because I’m a person who can still get easily annoyed, I can still notice things at the gym that pisses me off. The top thing tends to be the music. To say I have a healthy loathing of 95 per cent of EDM is an understatement. This is easily dealt with by simply putting in my headphone. The thing that annoys me is when people go to the soundsystem and crank it to the point where I have to put my iPod on blast to drown them out. When my hearing gives up the ghost in about 20 years time, I’ll probably trace it directly back to Atii Fitness.
Let’s put it this way, I already own two pairs of Bose headphones. I really don’t need those noise-cancelling earbuds they just released, but I am lusting over them.
There can be other things, but they’re minor and I know it. Barbies more interested in gossiping or posing than doing their workout. Gronks (male Barbies) doing the same thing, only grunting louder. There aren’t many, but it never takes much to get on my nerves a bit. Atii is actually pretty good, considering it’s a small gym with limited machines, weight and space. But considering I’m working out and grumpy, it’s not a surprise that my annoyance level is pretty easy to trip.
But on the weekend I saw something that actually made me question someone’s sanity. And I mean that very literally.
This past weekend was the first blast of winter for Iqaluit. Temperatures were in the -20C range, which is cold, but not ohmyjesus cold. The kicker was the wind, which was hitting 90 km/h, which meant the windchill settled in around a cozy -42C or so. We’ll deal with far colder than that before this winter is out, but it’s the first real taste of it this season, so there’s always an adjustment time.
So it’s bitter cold, extremely windy and while there isn’t much snow falling, what’s on the ground is blowing around, so there were a few whiteouts. Sunday was unpleasant, shall we say. That’s why I was astonished to notice a bike tied to the steps of the gym. Yes, someone biked to the gym in that weather.
I’m friends with one of the volunteers at the gym. He wasn’t sure who it belonged to, but confirmed he looked out his window earlier that day and saw someone biking up the road.
Look, if biking is your thing, good for you. I have a dear friend in Edinburgh who bikes everywhere and is a biking advocate. I think there comes a point, however, where you go “You know what, maybe I’ll leave the bike tied up today.” -42C windchill and 90 km/h winds with reduced visibility would be a little past that bar, I would think. My gym friend and I were discussing, quite seriously, if the person might not be mentally ill. I think you would have to be.
There was a time when I would simply go “Well, there’s a Darwin Award waiting to happen.” But I think I’ve changed as I’ve gotten older. It’s not just about making a choice that I think, sincerely, is a sign there’s something wrong with you. It’s also about the consequences when this inevitably goes wrong. When s/he gets hit by a car in a whiteout. Or hits a patch of ice and goes flying. Or gets frostbite or worse. It’s the trauma the people having to deal with your mistakes go through. It’s what your family and friends will go through.
I hope someone talk to that person and tells them they really need to think twice about that choice. Because they’re going to get hurt. I have no doubt about that.
Posted by towniebastard at 7:57 am 6 comments:

It's been consistently cold the last week or so in Iqaluit. You get a choice when you live up here...you can have it relatively warmer, but it's going to be cloudy or you can have bright sunshine that your body is craving, but considerably colder. You're not getting sunshine and warmth at this time of the year.

Earlier the week the last sealift boat made its escape from Iqaluit. I'm surprised it took as long as it did. For days it seemed like it was just hanging around out there, doing nothing. I can't imagine sitting on a sealift boat when it's -27C windchill, which we had last week, was particularly fun. I figured that was the last boat of the year.

Except yesterday the coast guard made a reappearance. Again, not really sure what she's doing out there. I guess it's possible another sealift boat is coming, or perhaps a fuel boat. But it's getting awfully late in the year. There are great clouds of mist coming off the bay today. The air is considerably colder than the water, and you can see the bay is starting to freeze up. You won't be hopping out there on a ski-doo for several more weeks, but it's beginning. People around town are anxious for it to happen. It's too cold to go boating now, so they want the bay to freeze so they can go ski-dooing.

The light was nice this morning, so I grabbed a couple of pics; one in colour and a slightly spookier one in black and white. 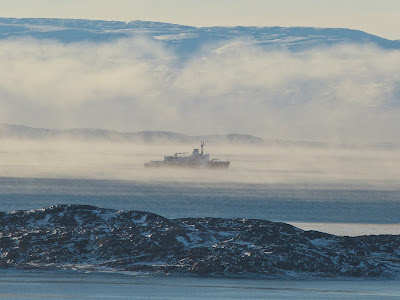 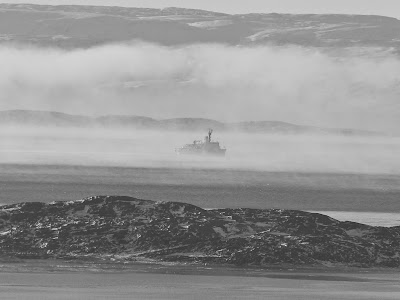 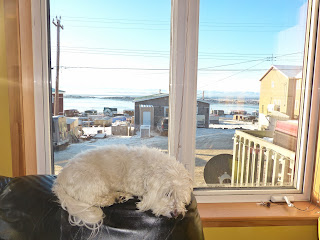 And just because it's been awhile, I figured you should get an update on Boo. As you can tell, it's a hard life being a little dog. He's resting up in preparation for his next defence of the house from the evil duo of The Water Truck and The Sewage Truck. It's a never-ending battle...trust me.

I've also discovered in recent weeks that there is a third Coton de Tulear in Iqaluit. I knew there was at least one other because the family came down to meet Boo before deciding if they were going to take the plunge (Coton's are not cheap). This lady got her dog (named Chiquita), from a different breder...one in Saskatchewan. Still, it's nice to know there are three Cotons in town, even if Boo wanted absolutely nothing to do with her when they met on the street. I joked we needed to start a Coton Club in town. Alas, the joke seems to go right over everyone's head. Anyway...

I always kind of regret how unsociable he is with other dogs. It's a consequence of when we lived "downtown" and there were so many strays - many of them not nice - so that we were constantly yanking him away from other dogs when they met on the road. It's too late to do anything about it now (something about old dogs and new tricks, I believe), but if that's the worse we can say about him, then I think we got off all right.

Well, Cathy's not fond of his habit of whining at 4 am to get up on the bed, even though he's perfectly capable to jumping up there himself. So I guess we can find a few bad things, but really, he's an awfully good dog. I regret that with the colder weather coming in his walks are about to get a lot shorter. Even with a proper coat on, we can't have him out as long. His feet get too cold. And yes, we know we can buy boots, but the little bugger is a Houdini in getting them off his feet. We've probably lost $100 worth of those things.

Last Five
1. Bad liver and a broken heart - Tom Waits
2. I think Ur a Contra - Vampire Weekend
3. The one - Garbage
4. Billy Liar - The Decemberists
5. Murder in the Southlands - Mark Bragg*
Posted by towniebastard at 1:33 pm No comments: