I don't have anything particularly profound to say about the Newfoundland election yet or a seat prediction. I could pick apart the different policy platforms of the parties, but others are already doing a good job of that. Although I am pleased that the one common thread is that party's seem to be going through great pains to explain exactly how they're going to pay for the promises they're making. You can argue whether or not if they're dreaming in technicolour, but I'm at least glad to see the debate happening.

People in the province have, for way too many years, just gobbled down hook, line and sinker whatever politicians promised about how we're going to do all these wonderful things for you - more teachers, more doctors, pave all your roads - but have always failed to mention how they were going to pay for all of that. We're all in a reality where promising to do stuff isn't enough anymore....how you're going to pay for it and is that the best way to spend that money is also important.

As for the rest, well, I remain slightly shocked the NDP are ahead of the Liberals in the polls. But percentages mean nothing in this race. If the NDP is going to have a shot, I think they're going to have to run a smooth, smart campaign, focus where they can win and pray for a late breaking wave like what happened federally and steal a bunch of seats in the St. John's metro area.

Having said that, they're still making some amateur hour mistakes. They launched their campaign on Monday near a construction zone. Yes, I understand you're try to make a point about housing for seniors, but make it in a quieter place. TV and radio reporters are important, and they have special needs. When you're staging your press event or media availability, you have to take these things into account.

So noise on Monday was a problem. Doing a policy release at 3 pm, which is deathly close to deadline for TV reporters (it was later bumped back to 1:30), having an event inside but not providing an audio system or lights for camera crews, producing a sign for the event that someone running for class president in junior high wouldn't use...

It's stupid little stuff like that which will kill you in a three week election campaign. It makes you look amateurish, which will eventually show up in the coverage. This election is all about showing the NDP are ready for prime time. Well, time to start acting like a professional campaign.

As for the Liberals, the only thing that jumped out at me is that perhaps when launching a campaign focussing on rural Newfoundland, doing it from St. John's is not the best way to do it. If you absolutely need to do it in St. John's because you want access to the town media, then at least go to Petty Harbour or Portugal Cove or something. Better still, launch it out on the west coast or something. Not exactly a stroke of genius there...

I haven't seen any bonehead stuff from the PCs yet, or complaints from reporters covering the campaign. Which means so far they are running a conservative, smart, straight forward campaign. Which is what you would expect. This is theirs to lose and they know it.

It's early days yet, so we'll see how it goes. But so far, I think it's pretty much going as expected. Which is to say, kind of boring.

Free tuition is a dumbass idea

With the provincial election getting ready to kick into gear back in Newfoundland, I am perking up a little more about what's being said. Yes, there is this minor patronage controversy, but I honestly think no one will give a shit about this. It's not going to swing any votes. It's the type of controversy only reporters and political junkies really care about.

Mainly because they're both pretty stupid.

I have some knowledge about this as I was involved in student politics for awhile in the mid-90s, including serving on the CFS national board of directors for about six months until I came to my senses. Look, I know CFS is a lobby organization and there's a provincial election happening. So yes, they're going to lobby the parties to try and get things that will benefit students. I understand that. It's their job.

But free tuition is what you want to shoot your load on?

OK, first thing first. The poll saying 80 per cent of people support free tuition is bullshit. I'm sure 80 per cent do. I'm also willing to bet you would get similar numbers if you poll people if they want magical fairies to arrive at their house and perform oral sex on them. Ms. McCormick argues this means Newfoundlanders want this. But I wonder if the poll asked what priority Newfoundlanders place on getting free university tuition. I'm betting it's not even in the top 10.

Free tuition has always been a dumb idea. And don't point to Europe because what works there doesn't mean it will work in North America. I am absolutely convinced free tuition would be abused and a post secondary education would not be taken as seriously as it should be. I know people who dropped $20,000 in student loans and still spent most of their time in university fucking around and didn't even graduate. Hell, my last two years at MUN, where I was spending my own money, was essentially me screwing around because I was having to much fun at the Muse and I had a girlfriend I didn't want to leave behind when I graduated. Now if people are willing to waste their own money, or money they're going to have to pay back, imagine what they'll be like with free money thrown at tuition.

Free tuition will not help produce more quality graduates in Newfoundland, which ought to be the goal. It'll get more people in university, but that doesn't mean they'll graduate, and it doesn't mean you'll get a more educated workforce.

Why CFS is choosing to focus on this, instead of improving the quality of education, or working on forgiveness after graduation, which are both achievable goals, is beyond me. You keep your powder dry for an election, and this foolishness is what you choose to blow it on. Dumb.

As for the NDP and grants....sigh...Grants were a mess back in the early 90s when they were finally phased out. I'll bet they would be the same now.

Because I think you should try and offer up some solutions rather than just shooting down other peoples...here's my idea.

If you complete your degree in a reasonable manner (a four year degree should be done in no more than five years barring medical/family crisis) then you get a percentage of the money spent on tuition refunded to you. This happens if you're on student loans or not. There's no reason why if you manage to pay your own tuition and get through university that you shouldn't get the same breaks that someone who pays for their education through loans. Let's say a one-third tuition rebate.

There you go...you have a tuition freeze right now. Tie any future increases into the projected inflation rate over a five year period so students can budget how much tuition will go up while they're at university. You get a refund upon the timely completion of your university degree. You have student loans to assist while going to university. By god, if you can't get a university degree and manage your debt upon graduation reasonably with all those breaks, then they should probably take the degree back from you.

It's September, which means the last parts of summer for people in southern climates. In Iqaluit, fall is now in full force and we got a reminder the weekend that fall is basically a very brief concept. Let's take a look at the view greeting me today as I was walking the dog. 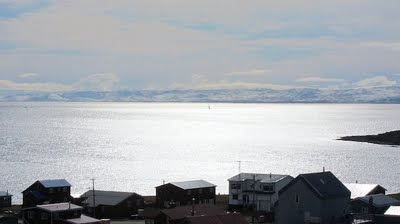 Yeah, that's snow on the hills across the bay. Happened over the weekend, which is pretty depressing, but welcome to the north. Actually, if you look closely, you can see a tiny spec on the bay... 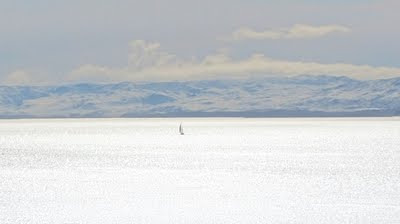 Which is clearly a sailing vessel of some kind. Seeing a boat with a sail on it is a pretty unusual site in Iqaluit at the best of times, but in early September, well, I think the crew is starting to push their luck a bit being in the kind of vessel, that far north at this time of the year. It was a pretty miserable weekend anyway, with lots of high winds and cold.

Which probably didn't make it that much fun for the guests on this vessel either. 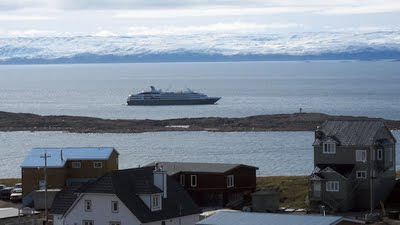 Yeah, a cruise ship came into the bay on Saturday, although I didn't see her offload any passengers until Sunday. Not the best weekend in the world up here for visitors. This time last year we were berry picking in our t-shirts. This year we had to turn on the space heater in the living room on Saturday to break the chill in the house.

A friend of mine is convinced we're going to have a brutal winter this year to make up for the easy one we got through. Last year it was raining at Christmas and the bay didn't freeze until January of this year, which is easily two months later than normal. Karma being what it is, he's convinced this year will be punishment.

I kind of hope that he's wrong about that. If for no other reason than I've checked the boating schedule and it appears our sealift boat won't be getting into Iqaluit until October 4th at the earliest. It's possible we won't receive out order until as late as October 17th. Which would mean unloading that box with snow on the ground and it being possibly very cold.

So if we could have another of those weather hiccups this year, at least until November, that would be awesome.