Continuing with our Birds of Prey trend....

There's a tip I picked up during comic cons. When you start off a new sketchbook, find the best artist you can to do the first sketch in the book. Artists are always curious what else you have in your book and will likely flip through it. And also being competitive, they'll try and top it.

It's a good theory, although it doesn't always play out in practice. How much money you're giving them to draw it will likely play into how good the piece is too.

(It can also backfire. I had one artist last year in Seattle reluctant to follow a Michael Cho sketch I got. I heard a story about how someone managed to get the legendary Bernie Wrightson to do a sketch in his book, and no artist would draw in the book afterwards.)

When I went to my first con in 2008 I went with a cheap $20 sketchbook I got from Staples. At the end of that con I vowed I was going to have a snazzy new sketchbook. I found the perfect one during my trip to Italy in 2009. Fortunately, you don't have to go to Italy to buy one, you can get it online here

So off I go to NYCC in 2012 with my new sketchbook in hand, determined to get a great first sketch to christen the book.

The sketch above is not that sketch.

Don't get me wrong...that first sketch is perfectly lovely by an artist I like featuring a character I love. I was pretty happy with it. And then I wandered past Matthew Clark's table. I knew of his art, of course. He wasn't on my list of artists I was looking to get a sketch from. But he was a hell of a nice guy to talk to and the price he was quoting was more than reasonable. I'm not 100% sure why I asked for the Huntress. He's drawn the character before, so perhaps I simply liked what I saw.

The one catch is that he wanted to take my sketchbook back to his hotel so he could work on it from there because he wouldn't have time at the con that day. It was the first time someone asked me to do that, although it's not unheard of. I'm not sure I would do it now....I have way too many sketches in that book and if the artist had it stolen or something....well....

I said sure. The next morning I swung back to his table and this is what I got. I was absolutely floored. I have routinely thought about cutting the first sketch out of the book is this is the first one you see. Or that it's that good I would cut it out, frame it, and hang it on my wall. For how much I paid for it, it's absolutely amazing.

I also learned, regrettably, that while my new sketchbook is lovely, the paper they used is a bit on the thin side. His inks bled through several pages. Since then I've had to put a piece of cardboard behind the page. And no watercolours (although I've still done it). I could cut the pages out, but it would be noticeable. Artists tend to be twitchy about people who go to cons, get a sketch and then turn around and sell them at a mark-up on eBay. I don't want anyone thinking I do that.

But yeah, it's lovely work.

Finally, I got to see Harley Quinn: Birds of Prey (or whatever they're calling in now), when I was in Ottawa last week. No idea why that movie is "under-performing". It's a hell of a lot of fun, great action sequences and is just weird enough for my liking. It's the best movie based on DC characters since The Dark Knight in 2008. I'm also not really qualified to say what is or isn't feminist, but it certainly felt more empowering than Wonder Woman or Captain Marvel. I hope they get to do more...

Posted by towniebastard at 7:42 am No comments: 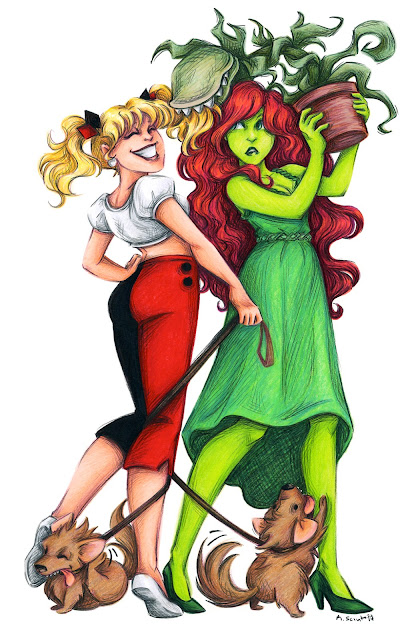 Birds of Prey opened this weekend, and it just so happens that I have artwork for a lot of the characters who appeared in the movie. So the next couple of weeks I'll run some of the pieces I have. But let's start with one of my favourites - Harley Quinn and Poison Ivy.

I love this piece. Cathy, who is at best ambivalent towards my art collection, really likes this piece as well. It's bright, vibrant, and playful. The characters themselves are now gay icons. They were once a villain sidekick and a cliched Batman seductress. Now they're someone who has dealt with an abusive relationship and a radical environmental activist who happen to be crazy for each other.

A lot of comic book fans would recognize the names of some of the artists I have, but most would probably be a little hard pressed to know the name Michelle Sciuto. To my knowledge she hasn't been hired by any of the major publishers and most of her work is commission based. I found her on Tumblr, when Tumblr was still a useful thing. Someone reposted her art, I liked it, started following her and then one day she put out a call letting people know she was doing commissions.

To this day, it's probably the best interaction I've had with an artist online. Often you ask for a piece (I want Batman". "Ok") and a few weeks/months/years (only once with the years) you get the piece. With Michelle it was a lovely back and forth. It went something like this:

Me: I'd like either a Harley and Ivy sketch or one with the Birds of Prey. Do you have a preference?

Michelle: Oh, I'd love to do Harley and Ivy.

Me: Cool. I'd like them in retro/pin-up style outfits (I'd yet to discover DC's Bombshells line, which has becomes a small obsession). Is that ok?

Michelle: No problem at all.

A few days later, I got digital scans. Rough pencils for three different outfits for each character, and three different poses for each. I was so wowed I asked if I could buy the rough drafts, but she included them at no charge. Here they are: 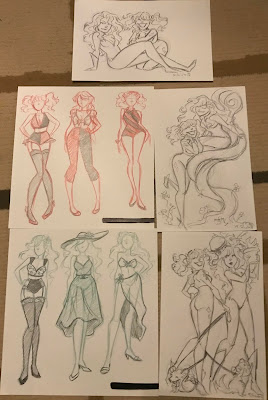 It was actually a pretty easy process. The other poses are fun, but the one with the Ivy and her hungry plant, and Harley and her hyenas was a clear winner. The outfits in lingerie and swimwear were fun, but I felt pushed the boundaries of one of Cathy's rule regarding art on my walls....nothing obviously sexual. Besides the dress and capri outfits look fantastic.

I believe the response when Michelle posted the final picture to her Tumblr the response was so strong she was flooded with requests for a print, which she ran for years. Which is cool; I don't deny artists any ways they can make money. And I still think she undercharged me for this.

You'll see more of Michelle's work in the coming months. But this is my first piece from her, and my favourite.


Some of you might recall the movie Red, with an all-star cast of older Hollywood stars. Bruce Willis might have been the lead, but anytime you want to give me a movie with Helen Mirren being fun and scary, I'm there for it. It's about assassins coming out of retirement when one of them is threatened. I quite like it. It's nothing earth-shattering, but it's fun and the sequel was good too. I'm sorry they didn't get to do a third one.

Perhaps a lesser know fact is that it's also based on a mini-series by Warren Ellis and Cully Hamner. The two bear only a passing resemblance to one another. As I recall, Ellis wrote at the time that if they did a direct adaptation of their series, it would be about 20 minutes long.

Fair enough. The series is a a tightly packed thriller. Three issues and done. Retired assassin Paul Moses lives quietly, talking only to the woman who handles his pension checks, and tries very, very hard to forget the horrors he's committed. That's fine until a new CIA director sees his file, freaks out, and sends a team to take care of him. Moses decides to show the CIA why he was so scary.

It's a little different than the quirky hijinks and romance from the movie.

Ellis is one of my favourite writers. It's still bizarre to me that this is the thing of his that's been adapted. Not Global Frequency. Not Transmetropolitan. Not Planetary.

And Hamner, look, he's a really good artist, but he's a bloody great storyteller. This page is a masterclass in how to tell a story. You could take out the word balloons and still absolutely know what's going on here. Ellis, very wisely, stays out of the way for most of the book and just lets Hamner do his thing.

So far I've shown a sketch from my sketchbook, a commission, and this is a page of art I bought. Just to give an idea of the different things I have. Comic pages have become quite the hot thing in recent years. The right artists can get thousands. A cover or a splash page can also go for thousands. But there's still something about just a well crafted page of storytelling that works too, especially if you're on a budget. To reassure Cathy if she's reading this, thousands were not spent.

This page doesn't have a dramatic story, but there are a few amusing highlights. Hamner put this and a few other pages from Red for sale online through his broker Essential Sequential. I freaked out because I love the book and figured the art was long since gone. I managed to snag this page. But through a bit of good timing Hamner and the company were going to be at Emerald City Comic Con when I was going to be there. So I was able to get the page without paying shipping.

When I picked it up I spoke to Hamner and expressed amazement that there were any pages left.

"Oh yeah, I was cleaning out my closet and I found this bunch of pages buried back there so I just threw them online."

Fair enough, I guess. Not every page is worth something. I've been to shows where some comic artists have had pages stacked on their table like pamphlets. They can be big money. Or they can just be taking up space. It's why a lot of artists are moving to digital these days. It's faster for repetitive tasks and you can fix mistakes quickly. And if you're not a big name artist on a big name book, the speed you can work offsets any money you might make selling pages.

The only other thing to mention is that during the con, when I would pull out my portfolio to slip a page, poster or something, the artist would often ask to see what else I had. Without fail they stopped on this page.

"Just look at the skill in that," one artist said. "I can't believe you got a page of this."

"He found them when digging out his closet," I said.