For nearly eight years I've been assembling my geek room in our house. This has been a careful process of jamming as much stuff in as I can, but yet still making it look like there is a plan other than "Let's see how much stuff I can put in here before Cathy loses her mind and sets it all on fire when I'm at the gym."

For the most part I think I've managed. There's probably a blog post coming on that at some point showing it off. I figure somewhere out in the world there will be people who will appreciate it. I think there's been a grand total of about three visitors to our house that have looked at my room and went "Cool!" as opposed to "wow" and then looked at Cathy with eyes that conveyed "you let him do that?"

One of the big pieces missing was a proper desk. For most of the last 8 years I've just been using an Ikea table, which has been perfectly serviceable but lacked character. And because it was five feet long, it tended to become a place where clutter accumulated. I have a lot of stuff in this room, but I try not to have a lot of clutter. There's a line there.

But finding a desk in Iqaluit with character is a little difficult. Not much in the way of antique stores. And when we're in Ottawa doing sealift, we are on a timetable. So again, not much time to go wandering around looking for a cool desk. Most of the desks we looked at are crappy computer desks.

Still the lack of desk was bothering me. So after some research on Amazon (Wayfair won't ship to Iqaluit, in case you were ever thinking of using it), I managed to find a perfectly serviceable desk. It has a little shelf unit on the side for keeping things like plants, docking stations and whatever figurine I've bought this week. Problem solved.

Except, of course, there's always a twist when you do these things. I ordered that desk on Thursday and Amazon shipped it at warp speed. It went from BC to Montreal in a night and should be here by Wednesday. On the other hand, the replacement copy of Pacific Rim I ordered will not arrived until October 18. The new desk weighs 30 kg. The blu-ray might weight 500 g.

If you can figure that out, you're doing better than me. I've long lost the ability to figure out Canada Post and Amazon.

Anyway, on Saturday, right before a blizzard blew in, we went to an estate sale for Bryan Pearson.

Before I get too much into Bryan, let me say one thing....2017 is going to be a year of transition for Iqaluit. From now on, new arrivals in town are always going to have a proper swimming complex instead of what used to be at Astro Hill Complex or nothing at all. There will be a real airport instead of the old yellow death trap, where once you cleared security you were put into what was called "the holding pen". Forget there not being a bar or restaurant, there wasn't a bathroom. The new airport might as well be the Taj Mahal in comparison.

And Bryan Pearson is just going to be a story long timers tell instead of the guy at Astro Theatre who would drag kids out of the theatre by their ear for talking or leaving voice recordings for movies playing this week describing them as "pieces of shit, but you bugged me to bring them in, so here they are."

I couldn't begin to do Bryan justice. Start with the Nunatsiaq article if you're curious for more. He passed away a year ago.

So this weekend, they began selling the contents of his house. I heard his house has already sold. Given its condition, location and nature of Iqaluit development, I wouldn't be at all surprised if it's torn down and they put a hotel there instead.

Curious, Cathy and I went for a visit. And it was filled with marvelous stuff. I really should have taken more pictures, but it seemed rude. But here are a few things I grabbed pictures of quickly.

So yeah, just piles of stuff. The cookware he had that was already sold killed us. It was beautiful stuff. Plus they were giving away all his old books, there was a ton of vinyl there and just lots and lots of stuff. It was worth it just to be able to wander through the place.

And there was a desk. This desk. Because of course I bought it. 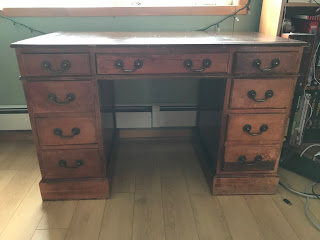 Sadly, I do not know the history of the desk. I have no knowledge of these things. It could be 20 years old, it could be 50 years old. But it came from Bryan Pearson's house, so the one thing I can be sure about is that it has character.

(Btw, I really recommend the experience of moving a 100 pound desk from inside a house, into your car, and then into its new house in the middle of a blizzard. Because we're dumb like that.)

I still have another desk coming, though. I'll give this one a week or so just to make sure it works fine for me. If it does, I guess the new one on its way will go up on the local Sell Swap. But seriously, I found two desk in three days after searching for years. Bloody typical.