Apparently, the post about Boo took the good out of me, because I've gone 10 months without writing anything else here. And I only just noticed a bunch of comments that were waiting for approval. So, sorry about that.

I am coming out of semi-blogger retirement because we've got a lot of texts and calls asking if we're ok after Iqaluit's water woes went international. For the latest update as of this writing, try reading this.

The longer answer, it's a bit of a mess.

So what happened? Sometimes earlier this month a high concentration of fuel managed to get into a water storage area of the city's water treatment plant. Depending on where you lived, you either didn't notice it, or it was like bathing in unleaded gas if you were trying to get a shower. Some residents have been complaining about it for weeks, but today they finally got confirmation that they were right. So steps are being taken to fix the problem, flush out the pipes and get things back to normal. I'd say at the earliest it'll be next weekend before all residents will be able to drink tap water.

So were we affected? No. I don't think so.

Why? Well,  there are two ways you can get water in Iqaluit. You can be on the utilidor and have normal water and sewer services through underground pipes, pretty much like most houses in any city in Canada.

Except Iqaluit isn't a normal Canadian city. At least a third of the houses are on truck water and sewer. A truck comes to our neighbourhood once a day and delivers water if we need it. Another truck comes every day and takes away the gray water. Our house gets trucked water and sewer.

If that seems inconvenient, it's really not. We prefer it that way. Some parts of town have been hit with boil orders over the years, but not us. Some have had their pipes freeze, which can be frustrating, time-consuming and expensive. The worst we had was some moderate flooding when the water tank over-filled due to a contractor's neglegence.

Anyway, so far as I can tell, we haven't had any contaminated water delivered. I've stuck my head in the water tanks and don't smell anything odd. Cathy has sensitive skin, and I figure if there was petroleum in our water, her skin would explode; it hasn't. And we've recently acquired an aquarium with fish. We changed their water last Sunday. They're still alive. So I think we're good.

Right now, we drained most of the "old" water out of our tanks as recommended, and the city has delivered water from Sylvia Grinnel River, which is just outside of town. The river is clean and many Inuit prefer to get their water from the river rather than the treated water from the plant. The worst we're going to have to deal with is probably hiring someone to come in and clean our water tanks once this all settles down. It's been four years so they should probably get cleaned anyway.

Now, if you're on regular water and sewer, it is more inconvenient. And, of course, the further down the socio-economic ladder you are, the harder this gets. If you have a house and a car, it's annoying, but fine. You can't drink the tap water and, if you're pregnant or have kids, it's a challenge. But the city is flying in tens of thousands of litres of water, plus you can get river water if you provide your own jug. You might have to line up and wait, but that's a manageable annoyance.

But not everyone has a jug (more were being flown in, but the city is sold out currently, I think). Or a car. Or the money to get a taxi to one of the refill stations or water distribution points. There has been some tremendous volunteer outreach to help people in these situations, but still, you can imagine having to walk a kilometre or two, pick up some water, carry it home, and then wonder if you have enough for everyone in your apartment to last until the next day.

All of this and just about everyone is aware that the inconvenience that we are going through, which will last a few weeks at worst and will likely have no long term health effects for most residents, is nothing compared to the hassles that too many First Nations have to go through with their drinking water.

So this is a long and rambling way of saying, we're good, but thanks for worrying about us.

Posted by towniebastard at 12:00 am No comments:

Farewell to a majestic floof 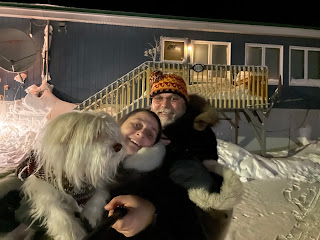 Boo's birthday was May 20 and I still remember when Corinna sent us the first pictures of our newborn puppy back in 2006. Corinna was a bit crazy in the way only the best dog breeders are....she wanted to make sure her baby was going to a good home and was very determined to make sure Cathy and I would be good parents. The whole "taking the dog to Nunavut" thing worried her a bit. But we reassured her we would take good care of him.

Never mind that the apartment we were living at that time didn't allow pets and that our request for a new place hadn't gone through yet. Details.

But it all worked out. We got a new place. Boo arrived and changed our lives. More than once I wondered if we would have stayed in Nunavut if it wasn't for him.

I am of an age now where myself, family and friends will look back and go "no, that was yesterday." The 50th anniversary of an influential record. I have friends who are horrified to learn they've known me for 30 years. Later this year people are going to deeply freak out when they realize that the Harry Potter and Lord of the Rings movies are going to celebrate their 20th anniversaries.

And I sit here this evening in our very quiet house and wonder where 14 and a half years have gone. Poof.

This is at least my third draft of writing this. The others were just filled with too much rage and anger. That it wasn't goddamn fair that Boo, that majestic piece of floof as a friend called him today, was going to leave us. He was too good a dog. This wasn't right. Not when we still needed him so much.

But that's not how these things work. We've known for awhile that the clock was ticking very loudly for Boo. Coton de Tulear's (Fourteen years and his breed name has never not sounded silly to me) live between 14 and 16 years. And yes, his sight and hearing had gotten severely compromised. But he was still so strong, energetic and playful. He still loved going for walks. He was still taking short ones a week ago. Up until Christmas if you caught in the right mood he'd do one of his zoomies, where he'd run around the living room like a lunatic barking joyfully at his humans.

But his personality began to change. He became more nervous and dependent on Cathy. That escalated through the fall and fell off a cliff right after Christmas. We had to leave lights on around the house at night, even in our bedroom while we slept, otherwise he'd start to panic. He began shaking and panting for no reason and it would take hours for Cathy to get him to calm him down. And it just kept worse. I looked in his eyes on Tuesday and our Boo wasn't there anymore, just a very scared little dog that didn't know what was happening anymore. And we were helpless. We couldn't make it better.

So we made the hard choice that anyone who has lived with a dog and who truly love them eventually have to make. It was the right decision, but god today was hard.

I said my first drafts of this were filled with anger. I started writing this on Tuesday when I knew Friday was likely our last day. And then Cathy and I posted up on Facebook that Boo was gone and the outpouring of grief and sympathy was overwhelming. I likely will never thank all of you individually - I tend to cry whenever I do - but if you dropped a line of condolence then thank you. From the bottom of our hearts, thank you.

But it helped ease away my anger and bitterness. It helped that if you met Boo you knew what an awesome dog he was. If you have or had a dog, you know how hard this is. But many of you never met Boo. It occurs to me that he was, of all things, a dog born at the start of the social media boom. Every now and then Boo would show up and light up your Facebook, Twitter, or Instagram. This little white fluffball. The majestic floof. He was a good looking dog. I suspect it was to Corinna's frustration that we never bred him. But whatever his looks, his personality and love were enormous.  We could not ask for a better friend and companion all these years. Whenever things might have gotten rough, Boo was there. The sadness will end, eventually. Then, hopefully, just the love remains.

I end with this story. Two years ago we came back from Christmas in Newfoundland just shellshocked. We'd been there for the holidays and to be with Cathy's mom, who was seriously ill. And then she passed suddenly. It was just a hard, hard Christmas. 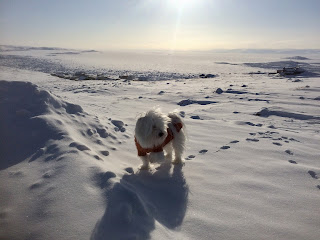 So when we came back to Iqaluit I was genuinely worried Cathy might squish Boo to death. Cathy had gone back to Newfoundland in mid-November to be with her mom and hadn't seen him in almost two months. She just needed her dog and Boo, being Boo, was just happy to see his humans. But particularly the human who spoiled him the most. There was much wagging of tails and jumping on his back paws to say hello.

Later that night, after Cathy went to bed, I took Boo aside and had a chat. "Look, little buddy," I said, "I know this might get rough for you because you're getting up there, but I need at least two more years, ok? You just can't go anywhere yet. She needs you too much.

And he did. He was a Good Boy.

Posted by towniebastard at 11:32 pm 3 comments: