For the second time in in two years I'm just back from the Emerald City Comic Con. I had so much fun in 2017 that I immediately began making plans to go back. There are a lot of perks to that con....Seattle is a great city, it's a four-day con so it's worth the work to get to it, a break from Nunavut in March is always nice....plus it's just a great con. It's big, but not insane like New York has become. And they work hard on their artist alley to make it diverse. So it's not just white guys selling art. There's lots of women, POC, GLBTQ and artists just getting started so this kind of con is a big break for them.

Some may go to ECCC for the cosplay, or the gaming section, the show floor and the endless supply of Funko toys (so, so much Funko at this show. Dear god....), but I live for a good artist alley. I don't normally post this kind of thing up. It feels like bragging, which I guess it is, but I have all this cool art and can't really show it to anyone. Cathy will certainly nod and make appreciative noises, but she doesn't love this stuff like I do. Which is fine. She has her things as well....

I might have gone a little overboard. But I always do. So here's the artwork I got, along with a bit of information about the artist. If you like the art, I really encourage you to go and track down the artists. They often have all kinds of things you can buy...original art, t-shirts, pins, prints, etc. 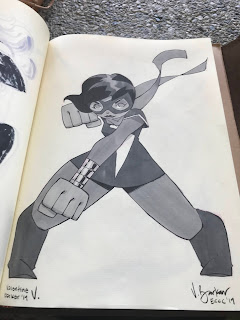 After a couple of false starts, my first commission was from Valentine Barker. Absolutely go and check out his site for some of the awesome "....Like a Girl" prints and t-shirts he has for sale. My niece may be getting a few things from him for her birthday. I often hem and haw about what I'm going to ask an artist to draw. It's why I've started carrying a list on my phone. However, Ms. Marvel was a pretty obvious choice for Valentine and he did a spectacular job. 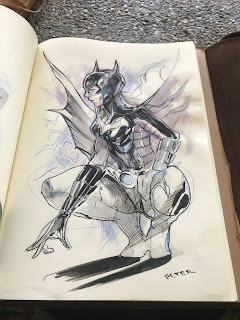 Phillip Nguyen was a spur of the moment commission. I was walking past his table and saw the prints he had there and started chatting with him. He had a particularly nice Batgirl when she was Stephanie Brown and I asked if he could draw her. He turned this about in about two hours. 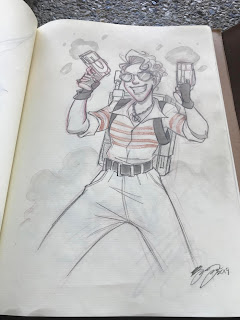 One of the funnier interactions I had getting a commission from the con was with Brianna Garcia. I carry a list of characters on my phone that I would like to see get drawn and ask the artist if they have a preference. When Brianna saw Holtzmann from the last Ghostbusters movie (I loved that movie. Fuck fanboys who hated it because it had women as the leads) on the list she got super excited and really, really, really wanted to draw her. Always have a list, just for this reason. 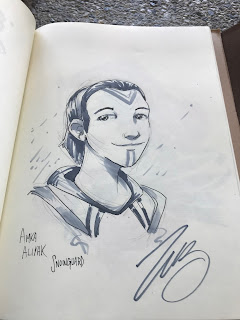 Jim Zub is the co-creator of the Inuk super hero Snowguard and it was absolutely a priority for me to get a sketch of her when I was in Seattle. Jim mostly writes these days, but as you can see, he's still a damn good artist. He was deeply reluctant to draw her for me. As he flipped through my sketchbook he was horrified I wanted his art in my book because he didn't think he was good enough. Which is ridiculous because it's a fantastic sketch and I'm thrilled I got it.

Just in case you ever doubt your skills, realize that some of the very best in the business still don't think they're good enough. I also can't say enough nice things about Jim. Had a great chat with him about how important Snowguard is and to keep fighting for appearances for her. He also signed a ton of comics for me, which was kind of him. 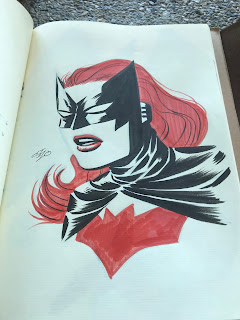 Michael Cho is one of the hottest and best artists in the business. He was the first table I went to at the con. By the time I got to it there was already three people in front of me. He draws everything well, but since he was only doing headshots I wanted something unique. Batwoman was, I think you'll agree, a pretty good choice. 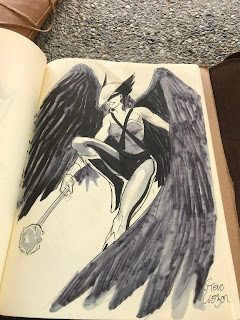 Steve Lieber is one of those artists that everyone in the comic industry admires not just because he's good, but because he's also pretty smart about the industry and what it takes to put together a good comic. He's drawn just about everyone at some point. I first remember discovering him reading the excellent Whiteout which he drew and Greg Rucka wrote (ignore the awful movie). Recently he was drawing the pretty damn funny The Fix. He also drew Hawkworld many moons ago, so I asked for this Hawkgirl. I think he drew this in an hour. 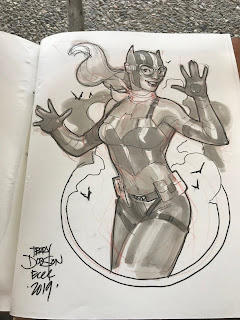 Terry Dodson is one of my absolute favourite artists. Two years ago at ECCC in Seattle he drew a beautiful Princess Leia. This time I hit him up for a Bombshell Batgirl (DC's Bombshells are a significant weakness of mine. I love the costume design). If you look closely you can see a page torn out of the book (this was a new book I was starting). He started drawing, hated it, tore the page out and started over.

"It was technically fine, but there was no fun in it. So it had to go." I'm pretty damn happy with results. 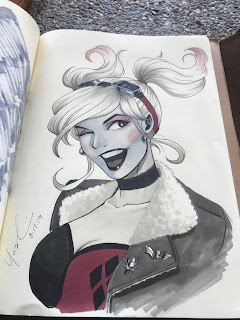 Lynne Yoshii is one of those artists I really didn't know too much about until I walked past her table, did a double take and asked if she was taking on any commissions. It was late Saturday, so I was pretty lucky she was. She scrolled down my list and settled on Bombshell Harley Quinn. This was the sketch that made me decide I was finished at ECCC. I picked this up Sunday morning, decided it wasn't going to be topped and stopped asking artists for commissions. Because I'm evil, when I go to the next con and an artist is flipping through my sketchbook, this is the last piece I want them to see before they start drawing. Because artists are competitive. Go ahead. Top this.

I tried very hard to focus on sketches at ECCC simply because I have no wall space left. However, my will power is for shit. I also bought several other pages of art. Now I have to find homes for them. 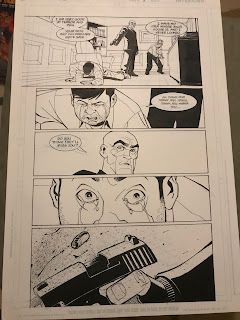 Some of you may recall the Bruce Willis movie Red that came out in 2010. It was originally based on a comic by Warren Ellis and Cully Hamner. The movie and comic have very little to do with one another. I believe Ellis once said the movie would have been 20 minutes long if based only on the comic. I love the movie, but it's its own thing. The comic is one of those things that looks effortless and slight until you dig into it and see everything that's going on. Hamner is a large part of the reason why it's great.

I actually bought this before the con and picked it up there. Hamner was apparently cleaning up and found a bunch of pages from the series. Which is hilarious. I took this page out at another table when putting something away and other artists wanted to look at it and were in awe I managed to get a page. It is a masterclass in graphic story telling. 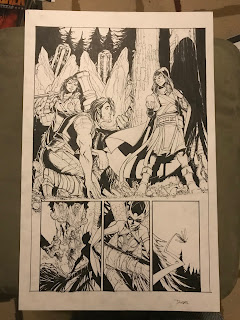 I am, I admit, slightly obsessed with Snowguard. I desperately wanted a page of original art with her in it. The problem is that most of the artists that have drawn her so far work digitally. This was especially frustrating when Marcus To did the recent Champions annual that focussed on her. Fortunately Max Dunbar did a recent story arc where the team visited Weirdworld and became fantasy character versions of themselves. This was an easy page to pick. Snowguard, Ms. Marvel, Brawn, Wasp and Man-Things. All good stuff.

Aside from being a great artist, Max is one of the nicest, most chill guys you'll meet. 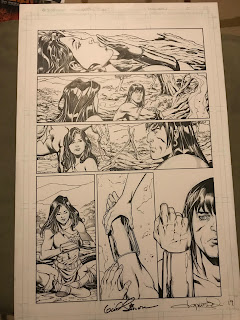 This page was a bit of an ooops. I was waiting to get Aaron Lopestri to sign a copy of the Wonder Woman/Conan book he did with Gail Simone, but he talking to someone. So I started flipping through his portfolio. sigh....Not a splashy action page, but a nice quiet character moment between Conan and Wonder Woman. I also got Simone to sign it and she spent a few moments appreciating the page and singing Aaron's praises. Justifiably. 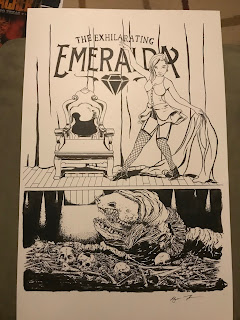 One of the cool things ECCC does each year is put together an art book called "Monsters and Dames" with all proceeds going towards a children's hospital in Seattle. It's a good cause and there's normally huge demand to get into the book even though artists aren't paid for it. One thing many people, including myself, then do is walk around Artist Alley and get the book signed by everyone. It's fun, you get to chat to the artists and sometimes pick up something from someone whose table you might have ordinarily walked past. But everyone understands you can't buy something from every table. There are 80 pieces of art in the book.

This page, by Ryan Fisher, was one of the ones in the book. I hit his table early Saturday morning and while he was signing the book I noticed he had the original piece of art on the table. I'm always going to have a weakness for cute magicians in fishnets, but this was a cool piece and he had priced, in my opinion, a bit too low. I'm surprised it was still there on Saturday, but I'm glad it was. 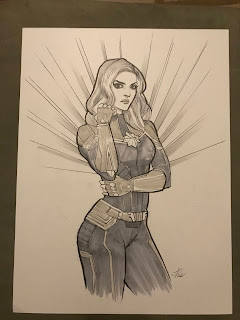 Charity comic art auctions are always dangerous for me. Fun, but there's almost 100% certainty I will accidentally buy something. This Captain Marvel by Chrystal Fae was it. It was the second piece auctioned off and Captain Marvel had just opened. I liked it but thought the bidding would keep going after I raised my paddle. Nope. It's a very lovely ooops, though. 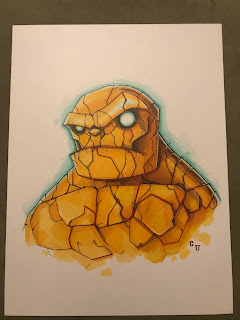 This last one I actually did gun for. I got outbid on a few pieces (always set a price in your head and stick to it, no matter how much it hurts to let it go), but this one by Chris Uminga came in less than I was ready to go, so that was nice surprise. I like Uminga's style and own a Wonder Woman figure based of his art. Also, I'm always a sucker for Ben Grimm/The Thing.

So there we go. A lot of art, but it's all lovely to look at and I got some good stories to go along with it. It's another reason I like going to cons. I buy from the artist, talk to them, get a good story or help out a good cause.

Last Five
1. Politik - Coldplay
2. Time of your life - Green Day
3. Candy - Tom Petty and the Heartbreakers
4. Sweet fire of love - Robbie Robertson*
5. Guest room - The National
Posted by towniebastard at 7:44 am No comments: