If you were Canadian and a geek in the late 70s and early 80s odds are you were buying Alpha Flight. A team of Canadian heroes basically assembled to give the X-Men a solid fight, they proved to be so popular that co-creator John Byrne launched a series featuring the characters.

A lot of people now may not know the team, or only be passingly familiar, but back in their day Alpha Flight was one of the best selling monthly comics. A chunk of that had to do with how popular Byrne was. During the 1980s there were few comic book artists bigger than he was. So when he left Alpha Flight after 28 issues, the series began a slow decline. Some big name artists worked on the series, like Mike Mignola (Hellboy) and Jim Lee (pretty much everything), but there's little after Byrne that is considered classic. Those issues have never been reprinted and aren't even available on Comixology or Marvel Unlimited.

The series was cancelled after 130 issues, which is a decent run. Since then there have been attempts to bring the series back, but most didn't last long and were of....variable quality.

There hasn't been an Alpha Flight series in over seven years. But given that Marvel reboots everything eventually, and that many of the characters have played supporting roles in recent years in books like Captain Marvel and the Immortal Hulk, there's a feeling in the air that the team is due for a comeback. Plus there's this intriguing rumour about a Hulk/Wolverine movie featuring Alpha Flight.

But what most people wanted was, well, a good Alpha series.

So a few months ago Marvel announced a one-shot - Alpha Flight: True North. Featuring three 10-page stories told by all-Canadian creative teams. This was accompanied by the thinly veiled suggestion that if it sold well, a new Alpha Flight series might result.

So how is the one-shot? Well, I'm going to do a rare comic review on the book. 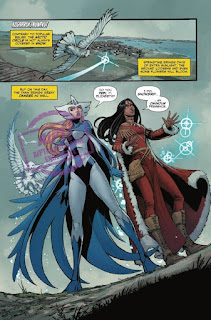 1. Mired in the Past
W. Jim Zub
A. Max Dunbar
C. Jim Charalampidis

This marks the third story in the last two years or so that Jim Zub has set in Nunavut. Two in Champions were in Pangnirtung (he co-wrote one with Nyla Inuksuk) with this one in Kugaaruk. At this point we should just consider him an honourary Nunavummiut.

In this case, two members of Alpha Flight go the Kugaaruk after an old evil, with a tie to Snowbird's past, reemerges from the thawing permafrost.

It's a solid little action story with Talisman and Snowbird having to fight a monster. It might not sound like much, but in the space of 10-pages Zub manages to tie off a very old loose end from Alpha Flight, set-up some potential storylines in the future if the series gets picked up (what else might be thawing out in the North because of climate change?) and script a solid fight scene with an emotional payoff.

Of course, he's ably helped by Max Dunbar. I first ran into his art on Champions, although he draws a lot of D&D related comics. It shows, because Dunbar draws some pretty spectacular monsters. Not the "I will have nightmares about this for days" (see Ben Templesmith and Bill Sienkiewicz), but more of a "those are some pretty cool looking monsters."

My only nitpick is that Talisman was introduced as one of the most powerful mystics in the Marvel universe, and yet she always seems to get in over her head. Can't address everything in 10 pages, but it would be nice if it was taken care of in the future. Although kudos for using her new, less skin-revealing costume which is just spectacular. 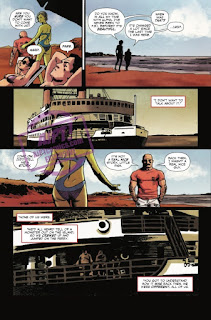 After defeating an off-page villain called The Beast in PEI, Aurora and Northstar work on their tan, while Puck and Marrina take a walk on the beach, with Puck telling an old story of his last time on the island and it's surprising connection to Marrina.

Oh, this one was a delight. I thought it was going to be a straightforward flashback Puck story, but the twist of how it connects to Marrina and her reaction made it a joy. Just in case you think you can't do a metric ton of character development in 10 pages this story proves otherwise. MacKay take full advantage of the fact that Puck has always been a natural storyteller. Plus he nicely reins in the "angry alien" character tic that was going on with Marrina the last time we saw her. She's no longer the naive girl we were introduced to years ago, or the victim she's been way too often. Instead she's a little playful, much more thoughtful and adult. It's a staggeringly welcome change.

The last page makes you wish MacKay had another 6 issues to play with. And seriously, someone now needs to write a story with Puck meeting Elsa Bloodstone.

Morrisette-Phan's artwork is perhaps a little less polished than what you saw with Dunbar, but then again he has a harder job. Dunbar got to draw heroes fighting monsters. Morrisette-Phan has to draw two characters walking on a beach talking, with occasional bits of flashback to monster fighting. It's more moody and atmospheric, but it's a story of monsters, regret and forgiveness. The art and colouring is subdued, but I think it works.

Btw, bonus points for Marrina referring to herself as a "Canadian, Newfoundlander and an Alphan." This is why you need Canadians on the book. That's a point of subtlety that I'm not sure most non-Canadian writers would get. 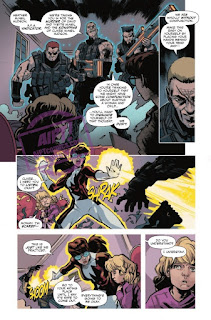 Heather Hudson (Vindicator) is on the run after the events of the last Alpha Flight series. After a mercenary team attacks her and her daughter, she has to decide whether or not to accept the help of her estranged husband, James MacDonald Hudson (Guardian).

I'm not saying Brisson drew the short straw, but Zub gets to do monsters in the Arctic and MacKay gets to have Puck being charming and telling monster stories. Brisson has 10 pages to try and fix the mess the last creative team left Heather Hudson in. Long the heart of the team, the woman who took over leadership of Alpha Flight when her husband was murdered in front of her (he got better. Comics!), she got worked over pretty good in the last series, what with being brainwashed, betraying her country and team, murdering members of her family, kidnapping her daughter, and then going on the run.

Brisson makes a go of it. After a bit of a clunky start (which turns out was supposed to be deliberately a little clunky), you get some nice scenes of Heather and James trying to at least be friends again for the sake of their daughter. And then you get a deeply creepy twist and cliffhanger at the end. Seriously, the more I think about it, the more I think women readers are going to be genuinely horrified by it. You now really have to hope for a new Alpha series, because it needs to be addressed and there also needs to be, you would hope, some pretty serious consequences for Mac and his actions.

As well, I'm kind of meh on Hepburn's art. The one action sequences felt more like something I would have seen in a 90s Marvel book. Kind of clunky. Heather's costume appears by magic, which is weird. And I really don't enjoy how he draws faces, particularly Heather's, which gets bizarrely angular at one point. It's ok, but not great.

So do I think you should track it down? Absolutely. Not just because I want more Alpha Flight comics, but this is a solid one-shot. It's friendly for new readers, taps into parts of Alpha lore that most long-time fans are going to enjoy and has mostly solid art. It also lays some pretty solid groundwork for a future Alpha Flight series. Which, hopefully, won't be too far away.

Last Five
1. Everything is wrong - Interpol
2. Nova Heart - Spoons
3. Are you ten years ago - Tegan and Sara
4. Bullet in the brain - The Black Keys
5. Talkin' about revolution - Tracy Chapman

Posted by towniebastard at 11:09 pm

Regarding the Heather and Mac's story: I wouldn't want to see an Alpha Flight book revolve around this damaged dynamic between the two. Mac seems to be the Canadian version of the evil Reed Richards.

I hope either Jed MacKay or Jim Zub (with Max Dunbar on art) get to follow-up on Alpha Flight, even if it's 10 pages in an anthology like MARVEL COMICS PRESENTS. Because they have shown they can tell a good, solid story without all the unnecessary decompressed storytelling that seems to be prevalent these days.

I personally do not want more stories, more "explanations", more "fixes" of Heather and James. For those who enjoyed volume 4, the comic books are out there to be re-read as often as one wants. For those who didn't enjoy it, it's better to be forgotten. Why? Because "continuity" in comic books is myth, and it is truly rare when one creative team succeeds another with the real intention of building upon what was done before.