1. Florida went pretty well, even though Cathy and I both got nailed with fairly vicious head colds. Nothing like getting sick while on vacation. Mine managed to stay on a low boil for most of the vacation, only getting bad the second last day there. Cathy got hit early and, for extra flavour, managed to couple it with an allergic reaction. So we had no idea what drugs to give her to combat what. And "All the Drugs" is apparently not a good idea as it does weird things, like self-medicated comas, for a start.

As this is our third trip to Florida in as many years, I think I'm getting used to the weirdness. One of my friends asked me what strange stuff I saw down there, and I couldn't think of anything off the top of my head. The weird is the new normal. I mean, giant billboards advertising Emergency Rooms didn't even really register. Or doctors advertising their services for lawsuits. For that matter, the sheer volume of ads for lawyers....none of it really registers as weird anymore. The Wagon Wheel flea market was actually boring. The $1.50 pineapples didn't make me break down and start crying as they did in previous years.

Even belly dancers with fire doesn't really startle me anymore. 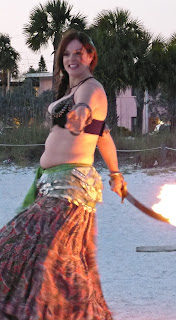 Or bunnies on the beach. 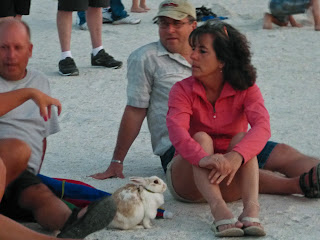 That bunny was actually on the beach right before Easter Sunday. Taking a break before the big day, I guess.

So yes, Florida is now kind of boring. Which means it's probably time for a change, but we'll see. We like going some place warm over Easter, but doing an all-inclusive is a bit of a waste of time when you don't drink, for example. And Florida is still quite cheap. But we have a year to figure things out.

Is it wrong, by the way, that I know most of the vacations we're going to take over the next four years?

2. There was some mild panic over whether or not Republic of Doyle coming back or not earlier this month. I confess I had mixed feelings. I've obviously been frustrated with the show, but was I frustrated enough to wish people out of jobs? Not really. I wish they would hire a proper script doctor to fix they many faults in the writing.

But despite the panic, there was never any real risk. It's still one of the CBC's highest rated shows. Also, and I'm sure they knew this when the decision was being made, the Newfoundland government kicked in something like $3 million to help with the cost of producing the show. I assume that doesn't count all of the tourism ads they put on during the show as well.

3. We're entering one of my favourite times in Iqaluit. The temperature is warm enough (around -10C) that you can put away the big winter coats and wear much lighter jackets. We can also crack open a window to let some fresh air circulate into the house. I understand that sounds insane for those of you down south as -10C is still too cold. But after a winter of -40C, well, the extra 30 degrees feels positively balmy.

But it's other stuff...it's warm enough to spend more time outdoors. The light at this time of the year, shining on the snow and the ice on the bay, is stunning. I'll try and get out and take some photos this weekend. It's nice to sit in the living room at the end of the day and watching snowmobiles going back and forth across the bay.

It's all on an edge, of course. In a few weeks time the daylight will go from nice to a little too much, when it will essentially give up being dark for the next few months, which leads to an increase in the craziness. The snow will start to melt, so there will be muck and potholes everywhere.

But for right now, it's nice.

4. Blogger has switched to a new format. Which I hate. So we'll see how this post works out...

Lets bring a little reality into your "winter of -40" Igaluit has rarely had temps like that during the last last 5 years or so. The average temps for Jan were -26 and Feb -24.... That being cold for sure is really not that much different than say Lab City or Schefferville. 15 years ago temps would have been into the -35 range with the occasional wander into a -44...Things are definitely much warmer now!!! that being said I am so happy to be moving into spring!!

Well, I count wind chill into that temperature mix. That might sound like a cheat, but as Cathy would point out, when you're standing outside on duty, and they say the temperature is -28C with windchill of -47C, then it actually feels like the later temperature.

Is it warmer in Iqaluit now than it was 20 years ago? No doubt. The delay in the bay freezing is all the proof you need of that. Having said that, it's still bloody cold up here during the winter.

Maybe in July when Iqaluit is all mucked up, it would be time to head to Town and try to become an extra during the Doyle filming season. Mention the blog - they'll let you in.